**All videos are done by Dr. Michael Greger M.D. to learn more about Dr. Greger please visit his website or his YouTube channel by click here.
28 August, 2014
Medication
5633

Type 2 diabetes is a form of diabetes mellitus which primarily affects the body’s ability to accept insulin, as well as overall insulin production. Since insulin helps the maintenance of metabolic rates concerning fat and carbohydrates, those who are obese or simply generally unhealthy in terms of diet and exercise are at an increased risk of suffering from diabetes. Type 2 diabetes is the most predominant form of the disease, accounting for over nine-tenths of all diabetes cases.

A fatty diet or lack of exercise can easily contribute to type 2 diabetes. In fact, these are among the most common causes. Unhealthy diets are generally considered to be more of a risk than lack of exercise, as the latter only accounts for approximately seven percent of diabetes cases. Diet can be regulated by cutting on trans-fats or saturated fats and replacing them with healthier foods. Green vegetables, or vegetables that are particularly leafy when grown, are among the best foods to help prevent risk for diabetes.

Some risk factors cannot be managed in the same manner as diet and exercise. For instance, some factors are genetic. Genetic factors can be such a contributing factor that a person is almost certain to develop type 2 diabetes if they have an identical twin who suffers from the same condition. The genes most associated with type 2 diabetes are those which aid in the production of insulin. While there are thirty-six genes associated with diabetes risk, the most common is the TCF7L2 allele. This affects the functions of numerous genes, which means that its expression in groups of beta cells has the capacity to influence diabetes risk by as much as fifty percent.

While it is not as common, people who lack testosterone or suffer from other medical conditions may be at risk as well. This is especially true of those who experience pancreatic difficulties, as the pancreas is responsible for insulin production. Pancreatic cancer can therefore lead to increased risk. Certain medications, such as beta blockers, antipsychotics, and glucocorticoids may pose risk factors; since Cushing’s syndrome affects the body’s cortisol levels in much the same way as glucocorticoids, this can be one of the medical conditions largely associated with the disease.

For those who are at risk due to obesity, risk assessment can be performed by measuring the body mass index. The body mass index looks at a person’s height as well as their overall mass. A person’s height (in inches or meters) is squared, and the result is divided into their weight or mass (in pounds or kilograms). If working with American figures, the number must then be multiplied by 703. If working in metrics, the number can be left as is. For instance, a person who is five feet and eleven inches tall would find the square of 71 inches (5041). Following the equation, this person must keep their weight at less than 179 pounds, as this is the point at which their BMI approaches 25. Those with a BMI at 25 or over are generally considered to be at higher risk.

BMI is not always the best way of assessing risk, but it can help. Those who gain their weight primarily from muscle mass rather than fat are usually not at risk. Bone density can also play a role in a person’s body mass. For these reasons, BMI is simply a baseline for patients and not a flawless form of risk assessment.

The onset of type 2 diabetes may be heralded by a number of symptoms. Patients may find themselves becoming hungrier and thirstier, while also experiencing an increase in the frequency of urination. In some cases, severe and unexplained weight loss may even occur. Bad cases can even lead to temporary blindness, with milder cases simply resulting in a blurring of the vision. Overall fatigue may be a factor, and the skin may become itchy. If left unattended, the condition may snowball into cardiovascular complications and may even result in the loss of a limb. If diabetes is the cause, doctors can diagnose the condition by measuring glucose levels in the blood.

As there is currently no cure for adult-onset diabetes, prevention is a major concern. The disease can be treated with insulin, medications such as metformin, and in the worst cases even weight loss surgeries. The best course of action, however, is to avoid the condition altogether through diet and exercise. 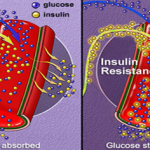 Next article - What is Type 2 Diabetes »
Type 2 diabetes is a form of diabetes mellitus which primarily affects the body’s ability to accept ...