**All videos are done by Dr. Michael Greger M.D. to learn more about Dr. Greger please visit his website or his YouTube channel by click here.
28 August, 2014
Vegetables
4183
While many fruits and vegetables associated with lower diabetes risk possess a number of nutrients and other compounds which increase their health benefits, broccoli depends largely on one element in particular. This is a compound known as sulforaphane. Sulforaphane offers multiple benefits, which include heart benefits, a boosted immune system, and detoxification of harmful substances within the body.

The heart benefits provided by sulforaphane are two-fold. First, it decreases the amount of certain molecules within the body that can become dangerous when reacting to the blood’s oxygen levels. By decreasing the number of such species within the human body, broccoli helps to lessen the number of factors which can inhibit proper heart function.

Second, sulforaphane aids the activation of healthy proteins. Specifically, it creates a protein known as nrf2, which is a leading factor in the creation of important antioxidants. It also aids the detoxification process, further reducing the presence of harmful substances that may have a negative impact on bodily tissues. The creation of healthy proteins and elimination of dangerous molecules makes sulforaphane an important factor in protecting the heart from the negative effects of diabetes.

The average person’s immune system is prone to growing deficiencies during the aging process. This is one of the reasons that diabetes can have a much greater impact on those who are old or infirm. Sulforaphane helps to ease this difficulty by keeping the immune system healthy, even when it would normally be prone to degradation. This makes it easier for the body to fight certain disease symptoms which might arise as diabetes symptoms worsen, especially symptoms affecting the heart, kidneys, liver and pancreas. In the worst cases, where diabetes might be prone to cause cancers, a boosted immune system is especially helpful in the betterment of a patient’s health.

As previously noted, the human body can be subject to degradation due to the presence of certain molecules within the blood or bodily tissues. This is especially true in consumption of broccoli’s sprouts. This part of the vegetable is rich in a compound known as glucoraphanin, which is a close relative of sulforaphane. It yields the same benefits in terms of the creation of healthy proteins that help to clean toxins from the human body. The elimination of such free radicals is integral to the fight against diabetes symptoms.

There are some cases in which broccoli consumption can do more harm than good. People of a certain body type may actually be at risk when consuming too much of the vegetable. Every person’s body chemistry differs, and those with a certain type of protein nutrition that can lead to an overabundance of alkaline are the ones at highest risk of suffering increased health defects as a result of too much broccoli consumption. This is an important issue to consult with one’s doctor or nutritionist when forming the best diet to prevent or manage diabetes.

Luckily, other vegetables contain the exact same benefits as broccoli, and can be used in its place to provide the same health benefits in the scheme of a more diversified diet. Cauliflower is one of the leading vegetables in this class, and is joined by others such as cabbage or bok choy. Basically, any vegetable which sprouts dark green leaves such as turnips or rutabaga is likely to be a suitable alternative for broccoli.

- Previous article « Blueberries
While many fruits and vegetables associated with lower diabetes risk possess a number of nutrients ... 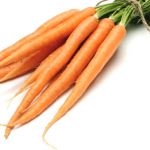 Next article - Carrots »
While many fruits and vegetables associated with lower diabetes risk possess a number of nutrients ...